I’ve been crocheting a baby blanket for a lady at work and now it’s time to share it with you. Lynette suffered from a major illness last year (I don’t know the details, I just know she was at death’s door) but miraculously recovered, only to find out a couple of months later she was expecting again. She already has two teenage children and wasn’t planning on getting pregnant. I think Baby No. 3 is a second chance, don’t you agree? I mean really. She was near death, recovers and then falls pregnant. There must be more to it than just “a unexpected pregnancy”. Knowing how special this baby is I put a lot of love into her blanket. You would too, wouldn’t you?

First step was to find a pattern. There are thousands of baby blanket patterns out there. Luckily, just before Lynette asked me to crochet her a blanket, I had my yearly magazine clear-out. For some reason I decided to keep the Simply Crochet Summer 2012 issue. It was one of their early issues, before they had their make-over. There isn’t really anything I would want to make for myself in that issue, but I kept it anyway. Strange how that works…. or not so strange because that issue contained a beautiful baby blanket pattern by Sirdar! I showed it to Lynette and she loved it. 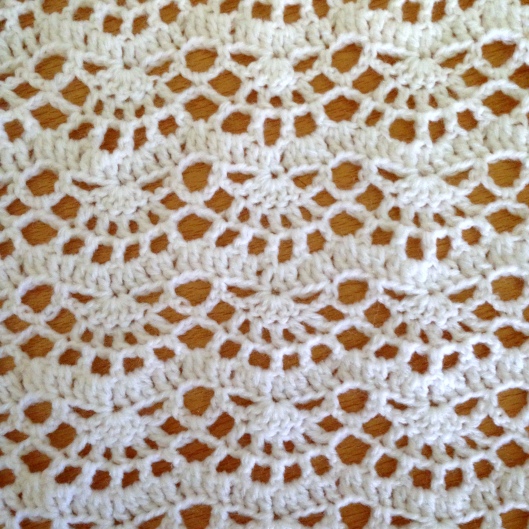 That pattern is for a newborn baby (61 x 76cm), but Lynette wanted something bigger that could be used for longer, so we decided on dimensions of roughly 76 x 89 cm. I used the same yarn as suggested by the pattern, so it was just a case of making a longer foundation chain and adding a few extra pattern repeats.  I ended up with a 72 x 92cm blanket. I realised I could (should?) have added two more pattern repeats in the row which would have brought it closer to the 76cm width, but I think the length will make up for the slightly smaller width.

The wavy “cosy cuddles” pattern is easy to do and you get into the rhythm of it quite quickly, but it looks much more complicated. The pattern doesn’t call for a border but I like adding borders to blankets. It just feels unfinished without. It also helps to bring a blanket to the desired size… I chose border no. 99 from Around The Corner Crochet.

The nitty gritty of the white baby blanket:

Border: Around The Corner Crochet border #99

The blanket is now wrapped and tagged with Ravelry tags, ready to give to Lynette on Monday. (I love my Ravelry tags. It’s printed on thick card and on the bag are care instruction symbols that you can circle with space to write the fibre content of the yarn. It’s only $5 for a pack of 6. If you make a lot of crochet for others as gifts, this is really handy.)

I hope Mom and Baby likes the blanket. I enjoyed making it and put a lot of love into it. I can see why people enjoy making baby blankets – it’s quick, satisfying and you are making something warm and snug for a tiny person. I like that.

4 thoughts on “A white baby blanket”